The Laxman, I never met! 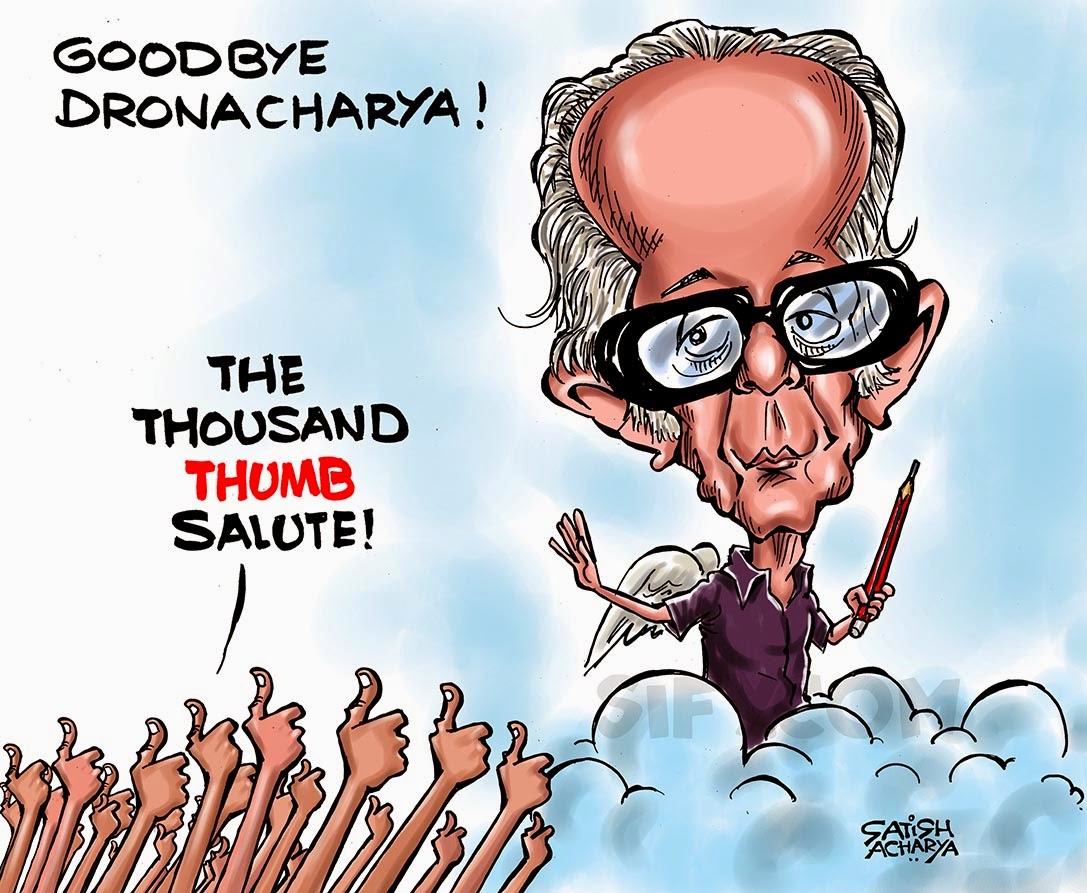 My only interaction with RK Laxman happened via a letter.
The cartoons of Laxman and Mario brought me into the cartooning world. As a school-going kid I used to re-draw/copy loads of Laxman’s cartoons which used to appear in The Illustrated Weekly.  Somehow I managed toget his address and mustered enough courage to send him a letter mentioning my passion for cartooning along with some cartoons. I was in 12th class then.  I didn’t receive any response and I wasn’t expecting one too. But one day I got a letter from him (sent through his assistant I presume).  He wished me luck and like any elderly South Indian, asked me to focus on education first.
I followed his advice. I focused on my education. But I didn’t lose focus on cartooning too.
When I look back, I understand the actual meaning of his advice.
May be he meant good education (not just degrees) is a strong foundation for an editorial cartoonist.
If you don’t focus on education, you may end up weakening a strong part of your cartooning skills.
Just like crores of Indians,  I loved Laxman’s cartoons, be it his pocket cartoons or his editorial cartoons or the illustrations he used to do for his brother RK Narayan’s stories.  Each of his work is a lesson for any cartoonist who’s eager to learn.
I lived in Mumbai for almost two decades, but never had the courage to meet him, in spite of many opportunities. I was in awe of his works and in awe of Laxman, the person.  I had heard many stories of his ill-temper. And I was scared that he’ll refuse to acknowledge me as a cartoonist!
In 2003, few months after joining Mid-Day, I got a call from The Times of India. They were looking for artists. While I was entering  the TOI building opposite VT station, I suddenly realized that this is the place the God of cartooning worked for decades. And unknowingly I touched the threshold, just like we do while entering a temple.
After meeting the editors, I could see that they’re not very keen on promoting cartoons, but they were more interested in ‘graphics’! And they were amused when I told them that I want to be known as a cartoonist. During the meeting one senior journalist asked me ‘how do you work? Are you given subjects/ideas by the editorial team?’. That question really shocked me, coming from a senior journalist at a mewspaper where Laxman worked for ages! That question proved that though RK Laxman worked with TOI, he never worked with them. He was his own editor, his own newspaper!
Laxman gave cartoonists the editorial space at newspapers.  He earned respect from fellow journalists through his works. He was the most complete editorial cartoonist India has ever produced. His cartoons had the best ideas, the perfect drawing and a immaculate sense of humour.  A rare combination!
There was nobody like Laxman and there will be nobody like Laxman. It’s improper to compare cartoonists, because no two cartoonists are similar. Cartooning is not just about the illustrations. Cartooning is more about the minds that create cartoons. So, no two minds can be compared!
I don’t regret not meeting my Dronacharya, because he lives with me all the time till my last breath.
Goodbye, Sir!

Thanks for sharing your post.
RIP RK Laxman SIR.
Prayers ...

nice tribute. His going and TOI's deterioration may be correlated.

Congratulations! Your blog post has been featured in this week's Tangy Tuesday Picks on BlogAdda! Thanks for a wonderful blog post. You can see it here - http://adda.at/tangy27-01

Congratulations! Your blog post has been featured in this week's Tangy Tuesday Picks on BlogAdda! Thanks for a wonderful blog post. You can see it here - http://adda.at/tangy27-01

Beautiful tribute!
Congrats on being featured in Tangy Tuesday :)