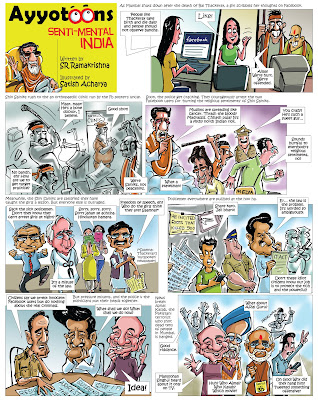 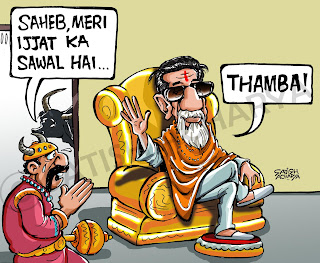 I have been a huge fan of Balasaheb Thackeray's cartoons, ever since I saw his cartoons in a Kannada magazine during the late eighties. I realised his authority on Mumbai city, only when I migrated to Mumbai in 1993. He ran his own govt from Matoshree. While staying in Bandra east, I could witness the influence that 'bungalow' holds over  Mumbaikars.
Many people hated him, many people adored him, many were scared of him. But nobody in Mumbai could ignore HIM.
As a cartoonist with Mid-day, I had drawn loads of anti-Thackeray cartoons. But never faced any problem from Thackeray family. When I was in touch with Aditya Thackeray, he would recall some of the cartoons where he was featured. I was puzzled when Balasaheb's another son Jaydev Thackeray called me to appreciate a cartoon and asked for a copy of it. And the cartoon was about Thackeray-bahu Smitha Thackeray's exit from Matoshree!
I was over the moon, when one of my Maharashtrian artist friends(who worked with Samna group) told me that Balasaheb personally picked cartoons for Marmik and he regularly selected my cartoons for the magazine. It was more like a stamp of approval for my cartoons, since I've been a great fan of his cartoons. 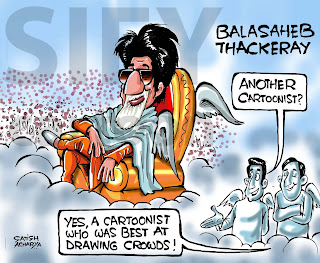 I wish he continued with his political cartooning. He was right there at the top with the best cartoonists like Laxman.
I personally feel Balasaheb had two personalities, one as a creative cartoonist and another as the head of a party which thrived on hate and violence. Shiv Sena was the tiger he's created and he was riding it. To ride the tiger he had to feed the tiger what it wants, hate and violence. May be he wasn't very happy inside as a creative person, with the job he was doing.
End of an era is much mis-used word, for obituary. But in Balasaheb's case, this is indeed the end of an era, in Maharashtra politics. He ruled Mumbai for four decades. He changed the rules in Maharashtra politics and other parties had to play the game according to the rules formulated by Shiv Sena.
Shraddhanjali to Balasaheb!
If possible please come back as a cartoonist, JUST cartoonist. Because I feel he didn't do justice to his cartooning potential. 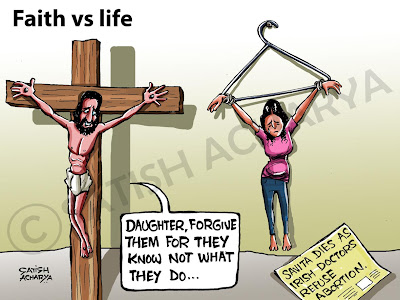 Savita Halappanavar was left to die as doctors in Ireland refuse to perform abortion, citing faith.