Will the Maha Govt strategy work? 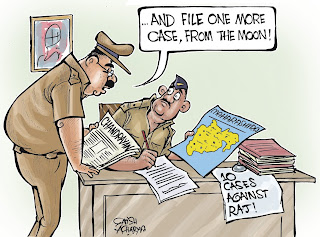 The Maharashtra Govt is in real fix. They let Raj Thackeray grow beyond their plans. Now they want to control him after the pressure from the UPA bosses.
They tried to file cases from different parts of Maharshtra so that Raj can spend more nights in jail. But will they succeed or this strategy will let him become more famous in other parts of Maharashtra?
Posted by Satish Acharya at 1:24:00 PM No comments: 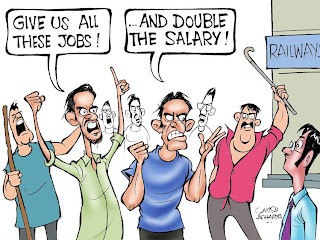 The locals want more opportunities in govt jobs everywhere.
If you go to any corner of this nation, you'll find angry locals who are demanding more jobs for them, who are ready to snatch their rightful rights!
But the studies show that, the locals aren't interested in low-paying Govt jobs.
They want a share in high-paying creamy jobs only.
So, more desperate outsiders migrate to do low-paying jobs.

The Maha Govt groomed Raj. But can they destroy this demon? 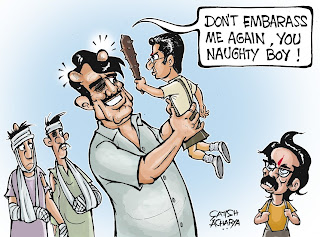 They groomed him. Now they're trying to control him.
Raj Thackeray is the demon created by the combined forces of Congress and NCP to weaken the real threat, Shiv Sena. They didn't touch him even while his blind army was destroying the cosmopolitan culture of Mumbai, thrashing North Indians, breaking taxis-rickshaws.
The Maharashtra even let him use Govt quarters for his Konkan tour!
But Raj Thackeray grew faster than they expected. Became more popular than they planned.
This demon is uncontrollable. But the Maha govt realised this only when the North Indian allies of UPA started putting more pressure on the Union Govt. Finally Raj was arrested and released. But I guess this arrest drama helps him more than the Govt, which is trying to save the face.
Posted by Satish Acharya at 1:06:00 PM 1 comment: 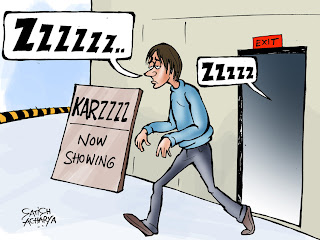 I'm not a big fan of re-making old classic movies.
And our filmmakers keep proving me right.
The biggest names of Hindi film industry failed to better a classic.
The poor remakes of Don, Umrao Jaan, Sholay haven't brought home any lesson, I guess.
The remaking of Karz is another disaster. The movie may still make enough money to help the producer try more adventures. Because Himesh has his own set of die-hard fans.

But if you have enjoyed the Rishi Kapoor starrer Karz, you'll exactly know why Himesh's Karz is a disaster. There can be only one Monty, Rishi Kapoor. If they thought someone like Himesh could pass off as Monty, then they need some serious lessons in film-making. But I'm sure, the remaking of Karz has more business strategies than the film making plans.

But please spare the classics, guys. We have enough talented writers in India to try new stories and be more adventerous in experimenting, rather than being adventerous in re-making!

Will this World handle Economic Challenge better than the one which handled the recession of 1930s? 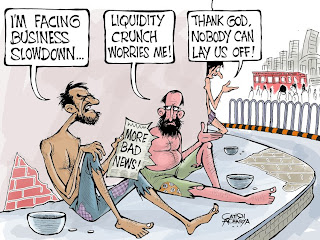 Economy slowdown!
Marekt Meltdown!
Recession! Layoffs!
Financial Market Crash!
Will it ever end? We seem to be in an age of challenge, Economic Challenge.
I'm sure this World will handle this challenge better than the one which handled the recession of 1930s. Or will they fail us?
Let's wait and see. Yes, suffer a bit! 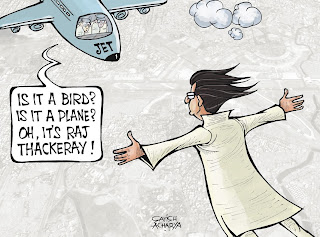 Nothing can stop Raj Thackeray, I guess.
All he wanted was a space in our daily newspaper and he's getting enough space.
Blame his success for our spine-less govt or sympathetic Mumbai Police force, but he's here to stay. The success he achieved with Jet Airways lay-off episode shows us that even educated Mumbaikars trust him more for solution than the Sens-led Union!

The baap of all reality shows! 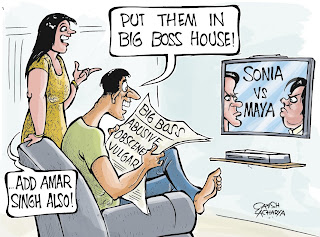 The Big fellas of Indian politics will never let us get bored.
They are always on our TV accusing, rubbishing etc etc!
Just imagine what if they are put in Big Boss!
That will be the baap of all reality shows!
Posted by Satish Acharya at 12:23:00 PM No comments: 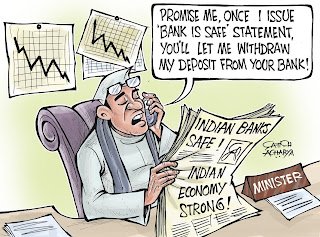 Economy needs reassurance. And every corporate bigwig and every minister is on our TV to vouch for the struggling banks and more struggling economy!
Posted by Satish Acharya at 11:56:00 PM 2 comments:

Are we within the reach of the info we are lookin for, yet? 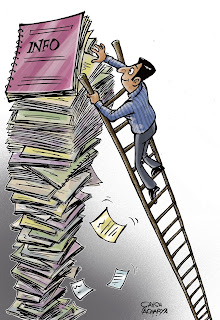 Illustration done for a special story on RTI.
Are we within the reach of the info we are lookin for, yet?
Posted by Satish Acharya at 11:54:00 PM 1 comment: 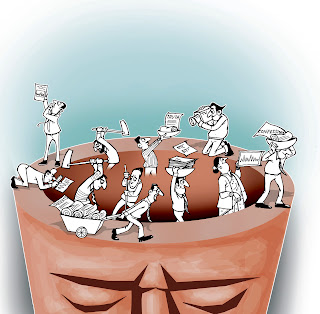 Illustration done for a story on Narco analysis, which is being mis-used/abused in a crude way!
Posted by Satish Acharya at 11:52:00 PM 1 comment: 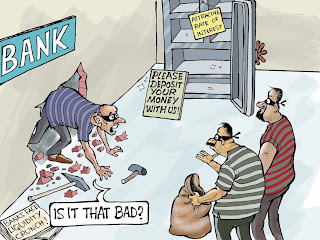 The big debate now in India is LIQUIDITY!
According to some economists, the economic slowdown is triggered by liquidity crunch of banks!
So RBI swung into action and made efforts to release around 60,000 crore rupees into the market through CRR cut. Hope the situation improves soon and Indian economy gets back on it's agile feet.
Posted by Satish Acharya at 11:47:00 PM No comments: 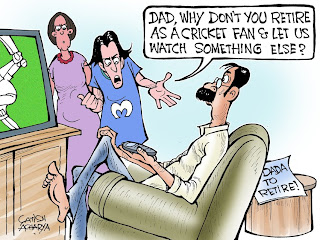 Dada is retiring finally!
And with him lots of cricket fans would retire from cricket too.
Posted by Satish Acharya at 11:48:00 AM No comments:

The very thought of LIVE-IN relationship, NO STRINGS, is in danger! 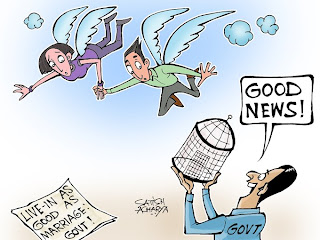 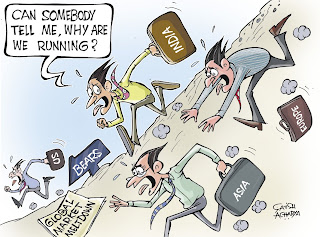 The markets all around the World are panicking and falling like nine-pins!
Some of them are reacting to the global turmoil in a bizzzzzzarrrrrrre manner.
Posted by Satish Acharya at 11:37:00 AM No comments: 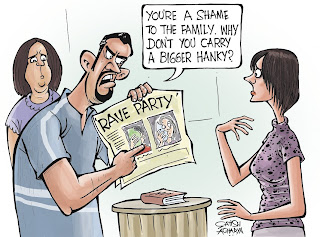 Mumbai police raided a 'rave party' at a pub and arrested around 240 youngsters for taking drugs in the party. These youngsters were paraded before hungry news channel cameras and newspaper photographers like criminals. I wonder how fair is it to parade these youngsters on camera without conducting medical test on them and proving that they did consume drugs!
May be most of them were not into drugs. Some are into drugs, I'm sure.
Posted by Satish Acharya at 10:46:00 PM 2 comments:

The pain of being a Global citizen! 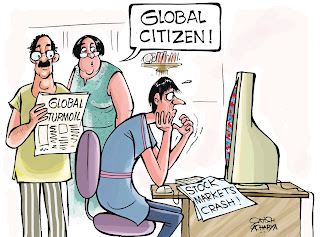 Some of us are still wondering why US financial troubles are haunting the Indian markets so much. May be we're suffering just for being a Global citizen!
Many of our analysts are still struggling to discover a strong reason, why Indian markets are dancing to US meltdown! 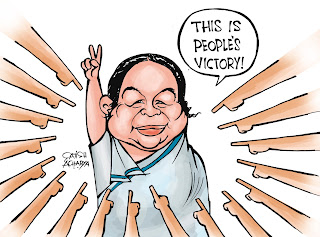 Mamata Bannerjee still seems to be in her fantasy world.
She claims, Tata's exit is people's victory!
Posted by Satish Acharya at 10:38:00 PM No comments:

The best gift BCCI can ever present these cricketers is 'respect' 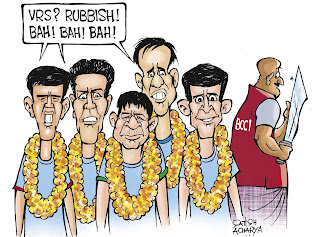 BCCI is in dilemma about how to say goodbye to the senior cricketers, without inviting backlash from the media and public. There are theories making the rounds about mutually agreed VRS programme for each of these ageing cricketer. But the cricketers, ofcourse rubbish them.
We've been treated to a great cricket-feast by these marvelous cricketers. The best gift BCCI can ever present these cricketers is 'respect'
Posted by Satish Acharya at 10:48:00 PM 1 comment:

Smoking in public places is banned in India 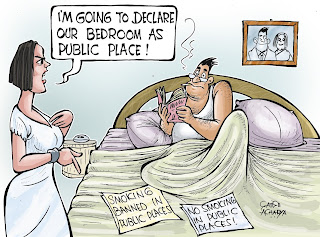 Smoking in public places is banned in India.
But the definition of PUBLIC PLACE is still open to debate.
What happens to the home/bedroom which is also shared by many members of the family?
Posted by Satish Acharya at 10:44:00 PM 1 comment: