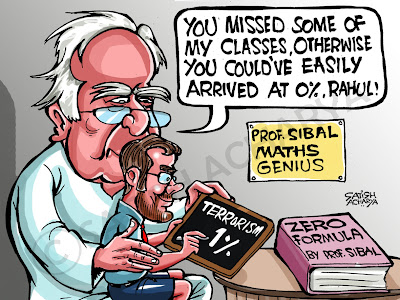 As a kid we were told that those who aren't good in studies join politics. But our politicians seem to be obsessed with complex numbers, often getting into scams of proportions which would scare any maths genius. And when get caught our politicians are ready with a maths formula, convincing us that the nation has lost nothing!

After Kapil Sibal's now-famous zero-loss 2G episode, Rahul Gandhi comes up with a another gem to show that 99% of terrorism is gone!

Midday cartoon
Posted by Satish Acharya at 9:05:00 AM