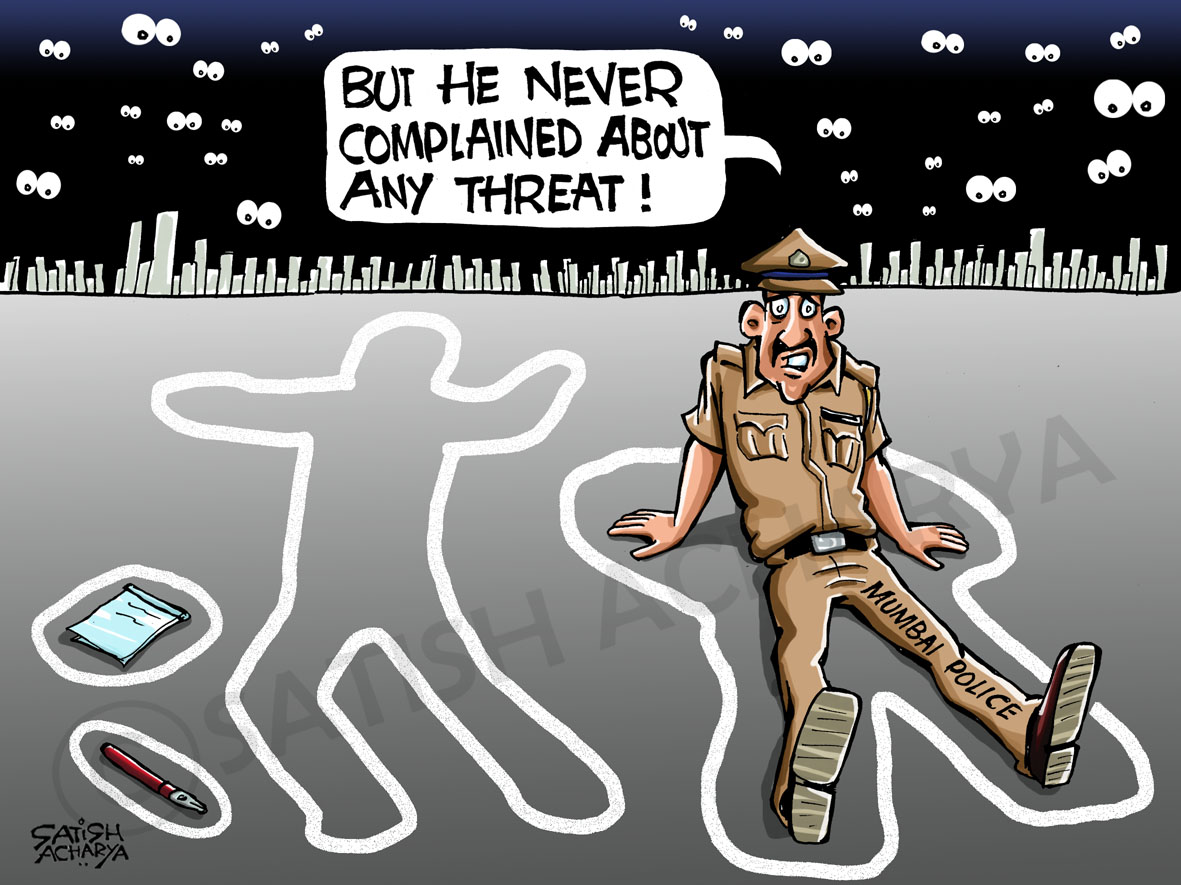 For me Jdey’s name was always associated with his columns in Indian Express about Mumbai’s underworld gangs. When he joined Midday few years back, he sat next to me (as I always sat with the newsdesk)  At the desk he looked as if he’s trying to hide his height and stature. Unassuming, reserved and totally focused on the monitor. When I introduced myself to him I told him you’re a celebrity journalist. He laughed and said he’s as good as his last story. Gradually we became good friends having dinner at the office canteen regularly. I never dared to disturb him at work, such was his focus on his monitor.
His mysterious manner of talking on the phone fascinated me. He would call people bhai, boss, chief etc. One of my crime reporter friends joked that now that I’m his neighbor, even my phone would be tapped. Later Jdey told me that he’s under observation from both cops and criminals with his phone being tapped. So, he tries to mislead them by talking to people in different names, sometimes calling even female friends as bhai! He was a mystery, which suited his investigative reporting.
At Midday, graphics people work with crime reporters,  the most, doing a story board, managing a visual/graphic and sketching criminals. So, I had a great opportunity to work with Jdey and know him as much as he wanted me to know. If I ever had any silly doubt  while working like, about the number of stars on policeman’s uniform I would either trouble Jdey or Vinod Kumar Menon.
When he was working on his first book, he wanted me to do illustrations for the book. So, he took me with him to meet the publisher. Though, illustrations never went in the book because of cost constraints,  on the way back he took me to meet the family of one of the oldest underworld kings of Mumbai at Byculla. The family treated him as if he’s a part of their family, sharing their grievances. He told me how politicians create underworld dons according to their convenience and crush them in cold-blooded encounters. He was angry and vivid. Those stories seemed straight out of Ram Gopal Varma’s movies.
Jdey was more like a cop, more like a spy who could go any length to get that little extra detail for a story. He had tones of info and photos about the darker side of Mumbai. He had a huge network of khabris, whom he’d feed regularly. He’d talk about his khabris proudly. He’d passionately share his experience of dealing with  the underworld and police, with us along with his home-made dabba. Though some stories he narrated would seem unbelievable to us, there was no denying about his hardcore crime journalism experience.
I thought he always lived his life dangerously, never caring about the consequences. He knew he was under constant observation. He wanted to hide from the public gaze. When I asked him why his picture in the paper has a cap covering his face, he said he wants to remain a stranger, which would help his profession. He said he wants to roam freely in the gullies of Bhendi Bazar or Behrampada without being recognized. He made many people angry. I remember I had done a funny illustration about Dawood Ibrahim’s sister in Mumbai for Jdey’s story. Next day Jdey told me people in Dongri are angry both with the illustration and the story. I then realized the danger involved in crime-reporting, who’d go deep into the comfort zone of hardcore criminals. But after a couple of days he’d still roam those bylanes meeting khabris and looking for stories.
It’s so ironic that his massive informer network couldn’t tip him about the danger to his life yesterday.
Jdey will live in the lives of all those crime journalists who work passionately without fear. This will alarm them but I’m sure it won’t deter them.

We know that when you type "spiritual masters" in the Google search engine, we come accross a list of websites where they show various masters from the current time like Ramana Maharishi, Osho, Sadhguru Jaggi Vasudev, J.Krishnamurthi etc. Likewise, there should be a website, where it should be dedicated to Journalists, who did not see this profession as a means to earn money but rather to live life intensely. Journalists like Jdey and Shahzad (A Pakistani Journalist) should find the place among them. And it has become very important to create such a website so that the newcomers, coming in journalism, can find inspiration from such people rather than becoming a part of todays corrupt media, where everybody is running for TRPs.

I didn't this. touching to read the inside story...

Good piece on J Dey. I was serving my notice at Mid Day when Mr Dey was around. Had a brief interaction with him. Although an ace crime reporter, he maintained a low profile. Good to see you blogging. Found it on Yahoo. Keep it up and stay in touch.

Subho (By the way, do you remember me??)

We as a nation are ruined by corruption. The boat is sinking, only thing is that we are ignoring it under banners like GDP, etc.

The problem lies with our society to which we all belong. If a person escapes work and blames others, plays politics, he is called smart and appreciated at various circles.

The word reference/influence/contact is the biggest disease for our society. Rather than imparting values in kids in school during 2-3 years of school, we are hungry behind marks. Show off is ample in our society which is hitting back at us hard.

As a nation, we are a failure, examples of which are incidences like 26/11. I have a lot to say, but just to tell you, my career was affected due to Godhra. After that peace is missing in many minds, often reflected in violent incidences on streets.

My comment might look lika hapazard one, but I have a lot to write, just that I dont know where to start.
If we dont improve fast, I am sure pakistan and china will rule us.

Real estate mafia did wrong things to us just a few days ago when they started illegal construction of commercial complex where 18 Mtrs. wide ring road was to come up. This was just a small example.

The incident of a journalist being killed is a bigger example along with recent Rape and Murder case of a girl in UP.

I wonder about what safety, law and order situation is persisting in our nation. Its rather safe to leave India where other Indians are busy hitting at Indians.

PS : This comment is from a person who wanted to join army and was deemed physically fit, but poor eyesight did not let me enter into army. The human rights reports of Eastern states make me think that I am fortuntae not to be a part of Army.
I request you all to read human rights violation in Eastern states by Army. An Honest Citizen of India will shed some tears for sure. Tags for searching are Manorama murder case. You will get a lot of information like this.